BIRMINGHAM, Ala.--(BUSINESS WIRE)-- Diversified Gas & Oil PLC (AIM: DGOC) (“Diversified” and the “Company”), a U.S.-based acquirer and operator of oil and gas producing assets, today announced the commitment of a new $500 million, five-year senior secured revolving credit facility (the “Facility”) led by Key Bank N.A. (“KeyBank”). The Facility will be subject to an initial borrowing limit of $140 million in conjunction with the closing of Alliance Petroleum Corporation’s acquisition, increasing to $200 million following closing of the acquisition of certain Appalachian-based assets of CNX Resources. Details of both acquisitions were announced on February 12, 2018.

The new Facility from KeyBank follows the successful completion of Diversified’s $189 million share placing, following the Shareholders’ General Meeting held February 19, 2018 in London, and is the fulfilment of the Company’s commitment to reduce its cost of debt and to maintain a progressive dividend policy.

Under the terms of the Facility, KeyBank is entitled to syndicate to other financial institutions, though the previously discussed borrowing bases are not contingent upon such a syndication. The Company anticipates that the Facility will be in final agreed form, approved and signed by March 15, 2018. 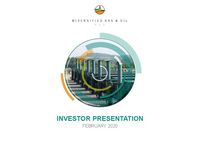 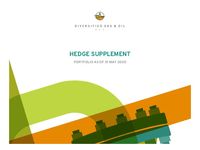 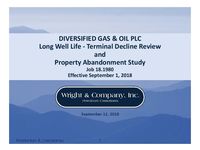