Alliance’s and CNX’s wells are geographically situated within Diversified’s existing footprint in the Appalachian Basin, and are concentrated in Ohio, Pennsylvania and West Virginia.

In addition to the producing wells, Diversified welcomes all of Alliance’s full-time employees, adding 165 talented people to its existing team. The enlarged company will continue to serve the communities within which it operates in a responsible and equitable manner.

“We are pleased to close on the Alliance purchase, which further establishes Diversified as a capable consolidator of large packages of mature producing wells. Importantly, this transaction allows us to preserve valuable jobs in the region as we welcome to the Diversified family the Alliance team of professionals who have built and run a high-quality operation,” said Rusty Hutson, CEO and founder of Diversified, and a fourth-generation Appalachian Basin oil and gas industry veteran. “As committed stewards to our investors, our communities and our employees, this acquisition aligns perfectly with our existing operations and growth strategy.”

Diversified expects to close on its $85 million cash transaction to acquire CNX’s assets on March 30, 2018. 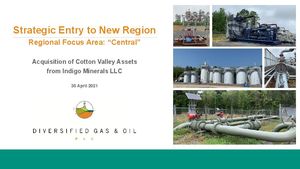